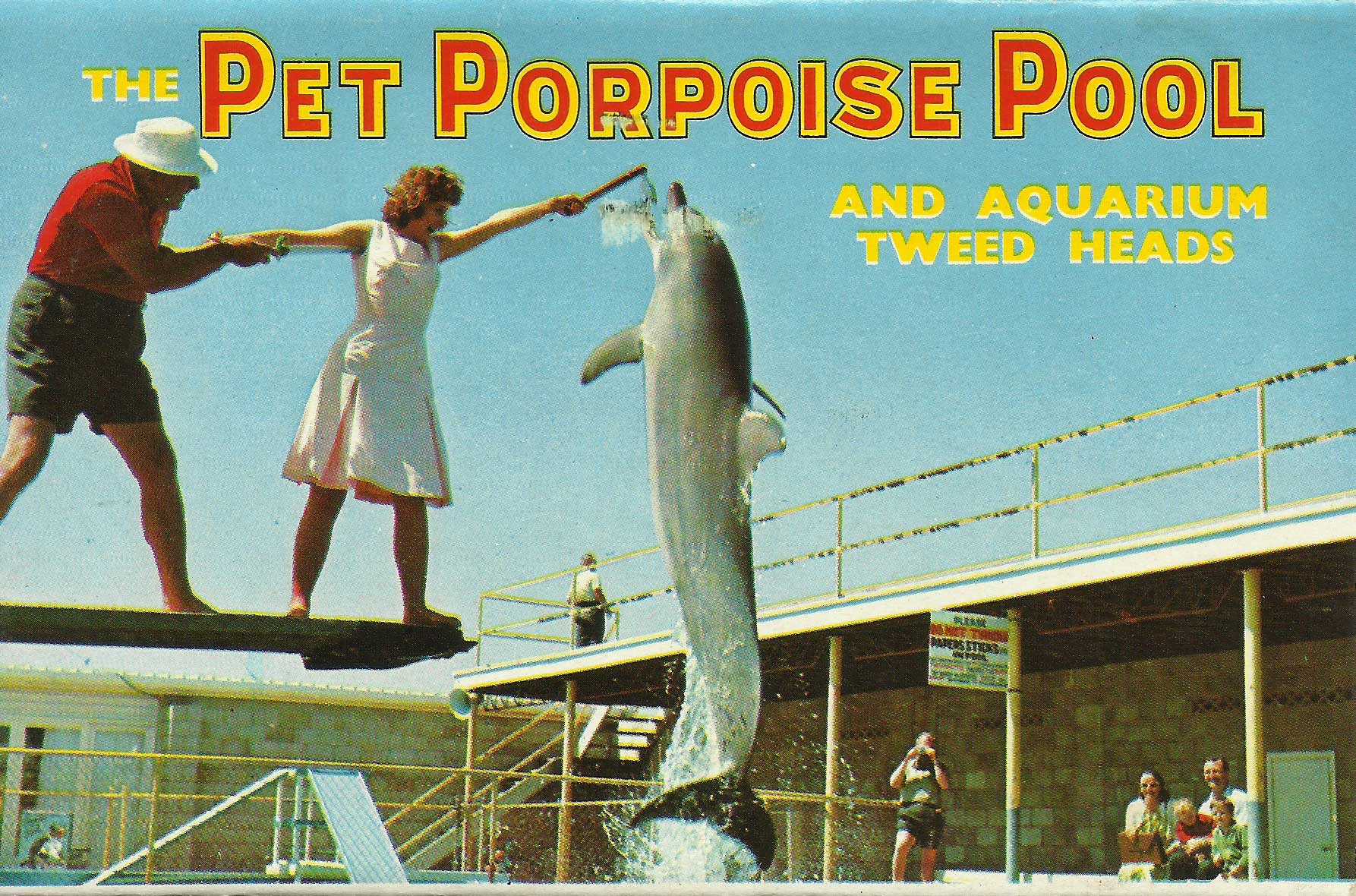 A couple of years ago I uncovered this in a secondhand bookshop:

This 1950s brochure – with its dense text and idiosyncratic language – is an intriguing document. There are vivid descriptions of undersea exploration technologies and the Beautiful But Deadly sea life that visitors witness beneath the waves.

A full page is dedicated to the materials and construction of the Observatory. This helps visitors feel safe as they venture through the “incessant war of the seas.” Sure, those giant clams may have an “evil reputation” for drowning grown men, but you’ll be protected by five inches of Ferro concrete!

Among all the descriptions of tranquil yet death-bringing sardines and anemones, the standout is the description of the founders – Vince Vlasoff and Lloyd Grigg.

It was from the minds of two young Australians that the design was developed for the World’s first natural, open sea Underwater Observation Chamber…..Vince Vlasoff, Australian born 37 years old Engineer with a wide knowledge of the Wild North Coast, a professional hunter and keen fisherman, designed and built his own 50 foot all-steel vessel. His partner Lloyd Grigg, a well known crocodile shooter and hunting guide, shares with him a keen interest in Underwater Photography. Through this medium the idea was conceived. It was in 1951 that the first sketch plans for the Underwater Observatory were laid out.
…
The total time for these two men to build, launch, and fix into position the Observatory, was 12 months.

I kind of feel for Vince, a bloke who builds all this stuff, yet still needs to point out to suburban Postwar Australia that he’s a local boy, so please don’t worry about his foreign-sounding last name. * No such qualification is needed for Lloyd “See My Vest Made of Real Crocodile Chest” Grigg. 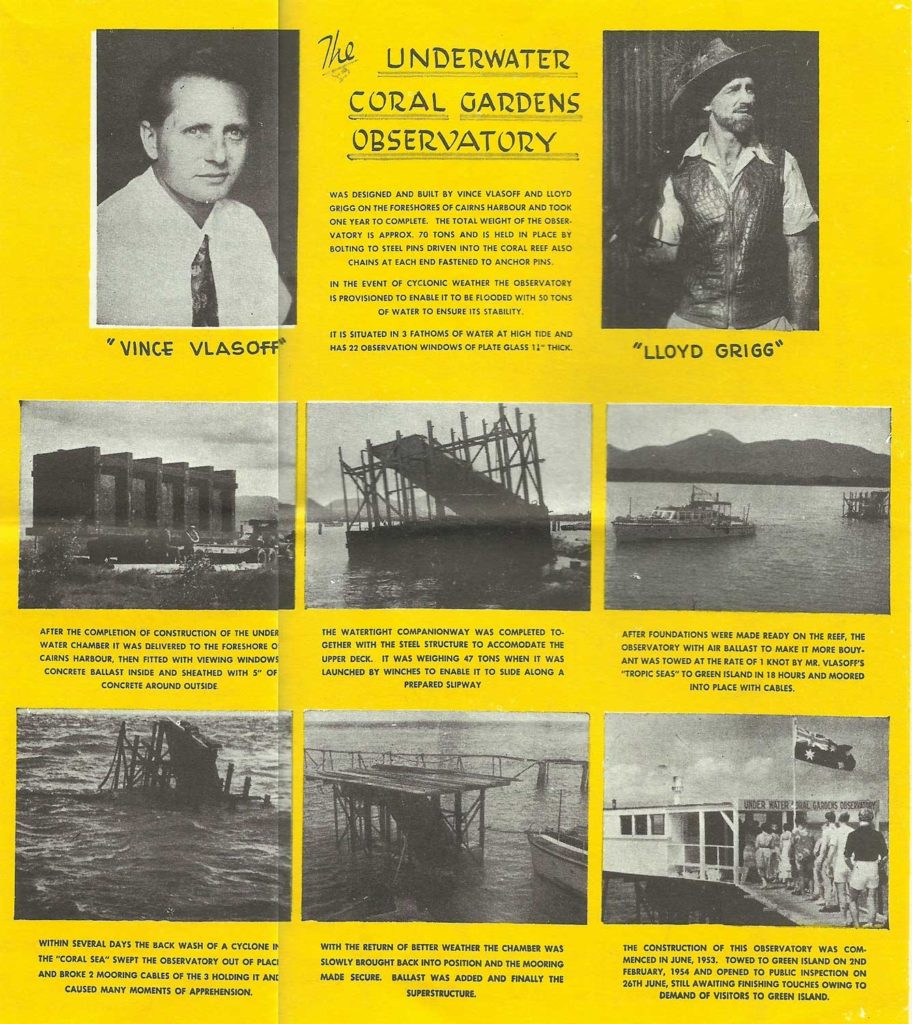 Vince Vlassof, Lloyd Grigg and the perils of installing an underwater observatory during the cyclone season.

I can’t help but wonder if on some level, consciously or not, the writer is evoking a narrative of colonial Australia – a bunch of guys sailing in and claiming the place as their own, any previous histories or inhabitants deemed unworthy of consideration. I do think there’s a level of yearning in a lot of tourism material from this period for the Good Old Days when a bloke could go out and explore a ‘new’ land and replace its history with his own.

I also see this in the career of Frank Hurley, only in his case actual adventure morphed to yearning for adventure within his own lifetime. In his tourism photos of a little car ploughing though forests, deserts and fields of flowers, I think I see echoes of the Endurance. 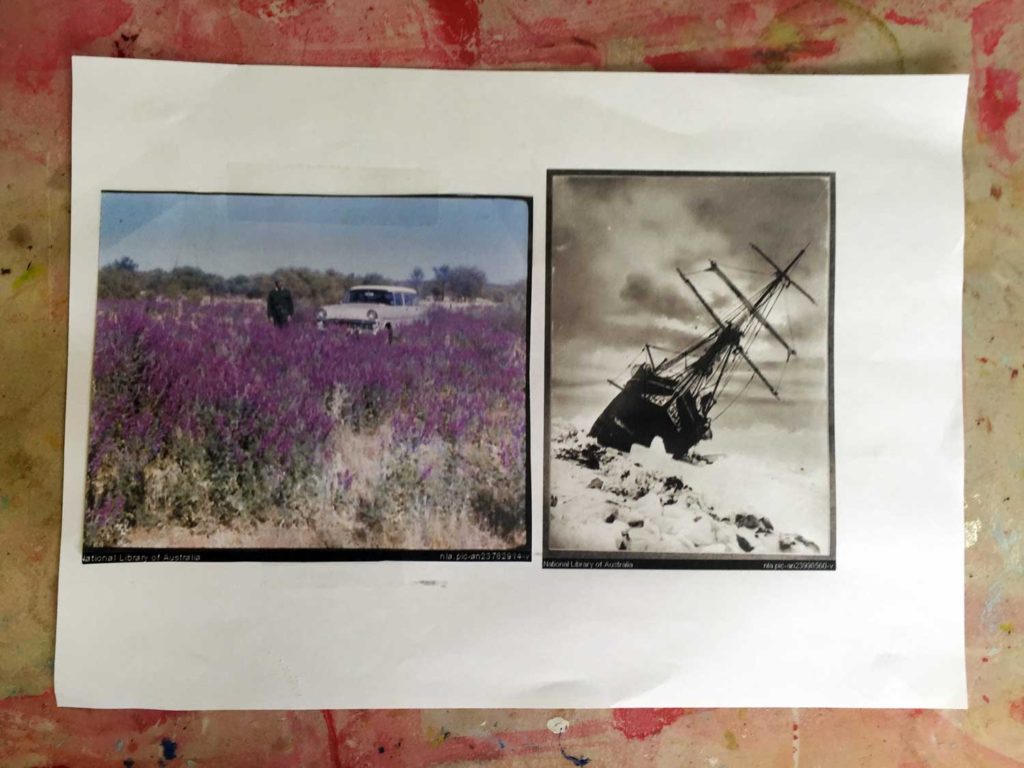 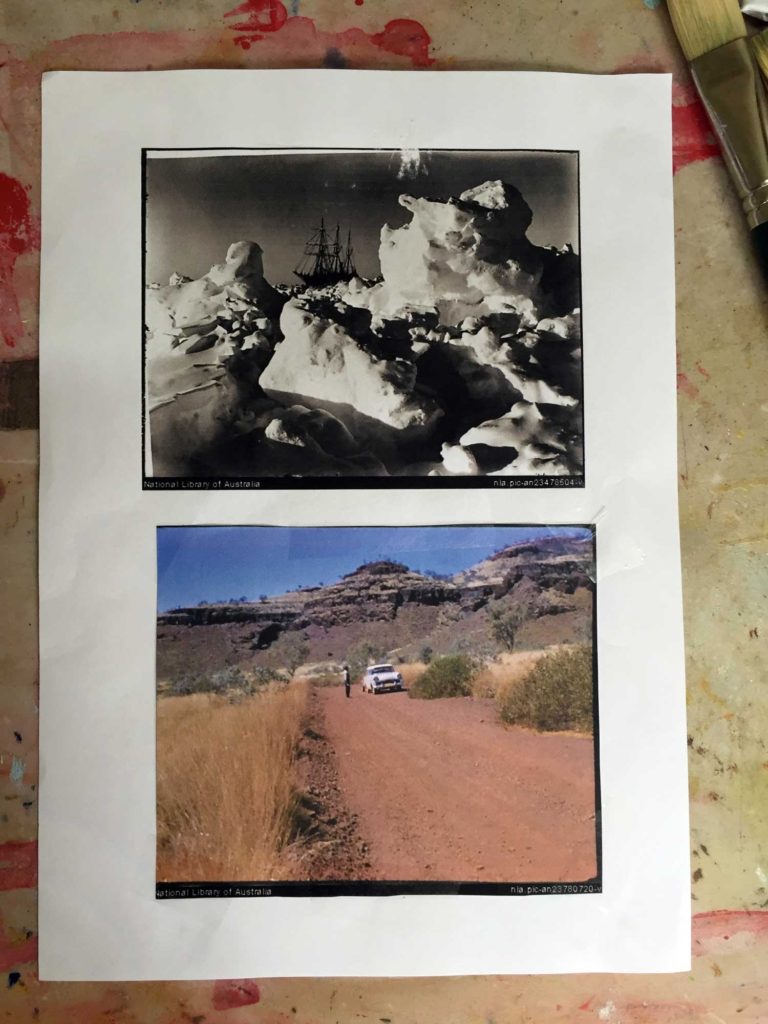 Frank Hurley compare & contrast – some of the images pinned up in the studio while I’ve been working on the series.

Vlasoff and Grigg weren’t alone in presenting themselves as heroic tourist pioneers, bravely facing down the Wild Australia so that it could be safely observed from behind inch-think cyclone-proof plate glass. Consider Jack Evans of Jack Evans’ Pet Porpoise Pool fame: 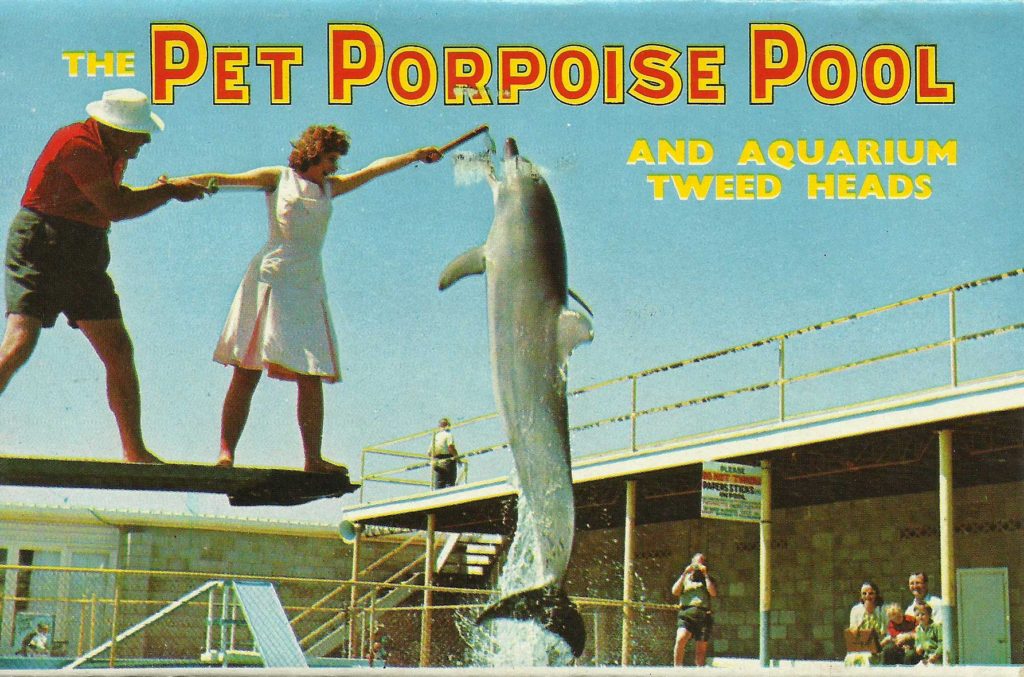 Jack caught dolphins and popped them into pools** for the entertainment of holidaymakers – including my teenaged mother and her family! I do have photos of Jack gallantly assisting both Mum and Grandma with dolphin feeding, but it’s probably not worth my life posting them here.

Looking at this material really piqued my interest. I can’t really think of a well-known tourist operation today that puts the founder(s) and their struggle to pull it all together on an equal footing with the attraction itself. Well, sure, there were Clive Palmer’s dino-golf/Titanic II projects, but in the end that didn’t work out too well.

If you’re interested in what was on Green Island before and after the Observatory, there’s a potted history here.

*Perhaps he needn’t have worried – according to this he has a couple of marine features named after him.

**Unless it was cleaning time… https://kathytroutt.wordpress.com/2011/01/11/dolphin-training/jackevanspetporpoisepool1970/